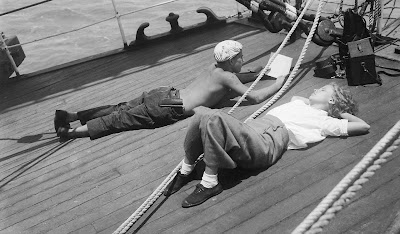 The Last of the Tall Ships: Photographs by Alan Villiers
Our stowaway was not long making a niche for herself abord the ship. She prooved a good worker and a thoroughly decent sort, and pretty soon her time was fully occupied with keeping the quarters aft cleaner than they had ever been before, and teaching English and playing chess. She made herself some dresses out of an old cloth form the cabin table, and good dresses they were; and before we had been very long at the sea the sight of her sitting on the after-hatch making a hair net or a hat - she was always doing something - excited no comment at all. It was a queer experience, to have a women stowaway aboard. No one in the ship had ever heard of such a thing before, though they had read about it often enough in books.
[...]I have gone to some pains to discover what were the sailors' objection to the presence of women in their ship. I found them pretty natural. There are tree chief ones, I think. First, that the presence of one unattached woman in a ship of men is highly undesirable and sure to cause trouble, in one way or another; secondly, that the nervousness and 'intuition' of women is bad for the morale of the sailing ship; and thirdly, that the more delicate nature of woman renders her unfit for the long and the hard voyages of the sailing ship, which require a strength of character as well as a physical strength that would find a good many women out. I pooh-poohed these objections, of course - for am I not the representative of my sex? - but looking back now, I admit frankly that there is more than something in them."
Alan Villiers, The Last of the Windships, The Harvill Press, London
por c.a. (n.c.) à(s) 6/07/2010 8 comentários: Links 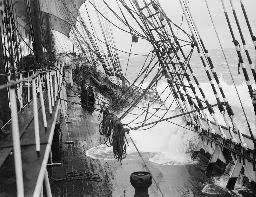 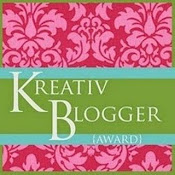